When will you have your swim today? It’s a bank holiday so the usual routine is out the window with kids and husband at home. It’s unlikely they will come with me so I need to find the balance between a lie in ( my son has promised me breakfast in bed) and swimming before the beach fills up with day trippers. I have opted for 10am at Costa Del Brunswick so it doesn’t eat into the day but the beach is still quiet as this is a city that sleeps, and it sleeps until late morning.

But what is your usual swim time?

Do you have dawn dips to start your day salty? There are a few salties that have been in, showered and started work before most of our alarms go off. We like their swim smile social media posts from the warmth and comfort of our beds. Then there is the early bird 8am crew that fit a swim in before the school run. The land has yet to warm up so there is no sea breeze and a natural off shore wind make perfect swimming conditions in the morning. The crowds are also yet to descend providing swimming solitude for those that seek it. It’s a great way to start your day. But be mindful when you are being mindful, there are no lifeguards and less people at this time of day with winds that push you further out to sea………..

Do you have dusk dips to end your day salty? After a hard days graft a sea swim can wash away the cares of the day. It is also a really good way to avoid bedtime if you have small children! The madding crowd have returned up the M23 or jumped back on the train to London. Many people have bedtime routines that include switching off gadgets or reading a book but my favourite way to wind down before bed is a swim in the sea, Better than a hot lavender bath and a horlicks. I love falling asleep salty but only really seem to manage this on holiday. Which is a good thing really as my hair the next morning should only be shared with strangers.

Then there is the daytime dippers. We are the envy of the 9-5s. We post our swimming smile pictures whilst they are chained to their desks. We are the self employed, the flexible working arrangements, the stay at home parents. We swim in between appointments, meetings and errands at the strangest of times. 10.45am on a Monday anyone? Up to 25 swimmers take you up on the offer.

I am all of the above, I swim solo early in the mornings, in large groups in the daytime and in the evenings with my husband whenever we are away. I change my swim times to suit my mood and my needs. But I always swim. Whether it’s your wake up call to start the day or your wind down after a days labour just GET IN THE SEA

My first swim of the day was in the morning at Lifeguard Post Romeo 8 on Brighton Beach. This is just in front of the beautifully restored bandstand. It’s the spot the Seabirds swim from when we do early morning swims as it’s sort of midway between us all and you can avoid the extortionate parking fees at that time in the morning. There were due to be 3 of us on this particular day. It was a 10.30am meet, the tide was going out and it was like a mill pond, as it has been for much of the summer. Perfect conditions for going round the buoys.

The swim area buoys are the signal that it is summer in Brighton. They appear in-front of the 11 Lifeguard posts from Saltdean to Hove Lagoon in May and stay there until September. Unless there is a particularly strong storm where they can end up all over the place. They are placed 100m apart, going out and across 200m. With the growth in outdoor swimming and triathlon popularity they are used by locals to roughly measure the distance of their swims. A couple of the swim areas can resemble the M25 when clubs and groups meet there to clock up some kilometres.

On this particular day we had the swim area almost to ourselves as myself and Seabird Ruth headed out to the first buoy. Between the first and second buoy I was into the usual hypnotic rhythm when I began to hear something from under the water. It was different from the usual close to shore shingle song or the sound of the wake you create. It was a low level hum that just got louder and louder to the point of distraction. At that point I stopped swimming and looked up. I was a couple of metres from the furthest buoy and immediately saw the source of the noise. A speedboat going at a ridiculous speed practically in the swim area, no more than 5 metres from my swim capped head. As you can imagine the driver received the type of verbal assault that would make a salty sea dog blush. He proceeded further into Hove and dropped his anchor right in the middle of the quiet family beaches.

By this time seabird Ruth had caught up and was also using swear words we save for serious safety situations. And then another female swimmer. We proceeded to stop at the buoy to discuss, the proximity of losing my head, machismo, jet skis, idiots but most importantly swim safety. The swim community never ceases to amaze me. 3 women who have just met, sharing stories 200 metres out to sea. We concluded that even though we were within the swim area it would be sensible to wear a swim tow floatas well as our brightly coloured hats. Particularly as some seabird swims are parallel to the beach and leave the swim area although remain in close proximity to the shore. 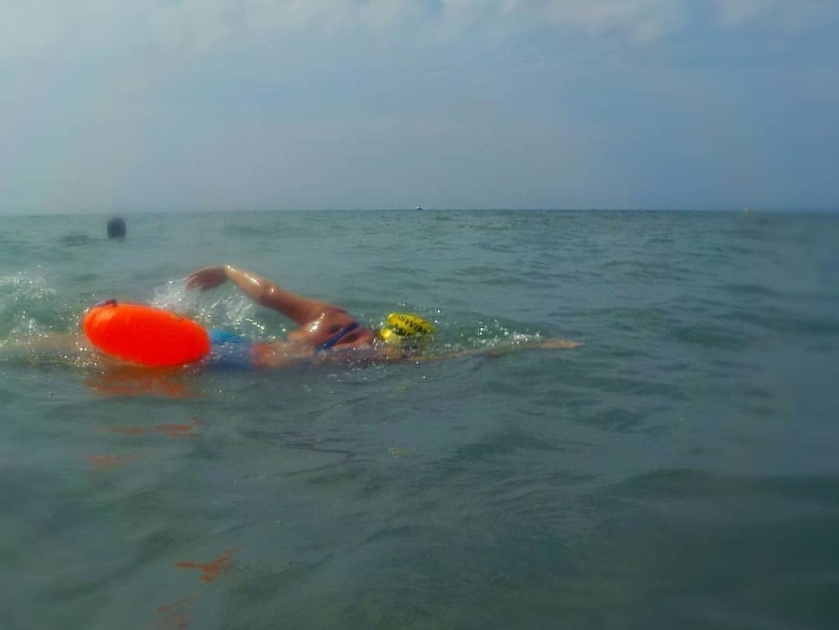 It spooked me enough to head back in. I’d lost my swim mojo. We joined our third Seabird in the shallows for a frolic instead. We were met on the shoreline by a lovely lifeguard who advised us that she was keeping a careful eye on us and was also outraged at the idiot (insert other word here) driving the boat. She had reported it to the Seafront office and it was registered at the Marina. Unfortunately the Seafront boat hadn’t launched yet to intercept but they would be having a conversation later with the offender to hammer home that inappropriate speed, metres from the swim area was not only stupid and unnecessary but dangerous.

The good news was it was a double dip day and I was due to meet Ian, one of the beach lifeguards for a swim at Romeo 10 in front of the King Alfred swimming pool during his lunch break. Boy was it busy with swimmers. As we entered the water Ian proceeded to tell me that one of the Seafront Coordinators had seen a shark the day before. I laughed it off as a dog fish. We bumped into one of the Swim Trek directors finishing his lunchtime swim in the shallows as we were warming up. It was slack tide so we could swim either way around the buoys and chose to go west to east. At the first buoy Ian decided I needed to do swim drills. So we headed to the furthest buoy with me tapping my head with my hand, next buoy finger drags, next buoy arm pit tapping and so on until we’d completed a circuit.

From a fright to frollicking to swim drills all in one day.

I made the school girl error of enquiring more about the shark spotting. Turns out it was more than a bottom feeding dogfish. 5-6ft and definitely not a cetacean……… 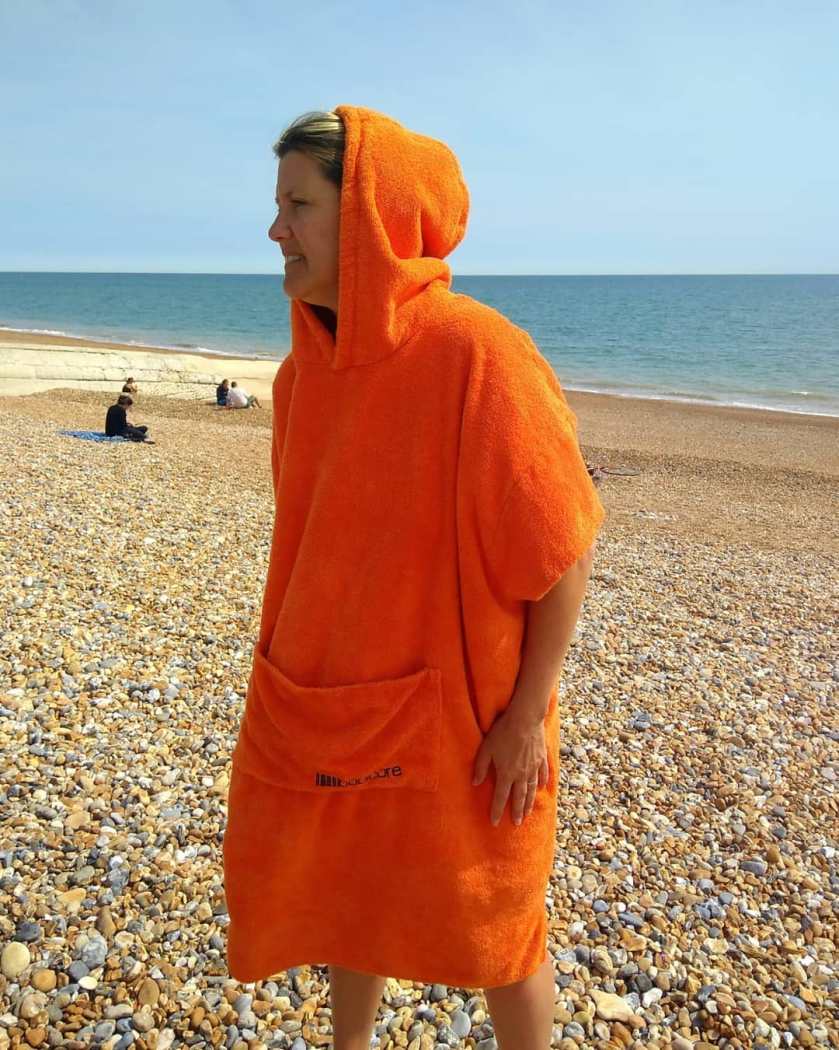 There has been progress since the Fish that forgot how to swim.
Today I did a solo swim around the buoys.  I am feeling very proud of myself as I am not a solo swimmer. Seabirds swim in flocks. The other seabirds opted for a parallel groyne run but I was desperate for a long ‘proper’ swim. I was going against the formation.
I was provided with lots of Seabird support and encouragement to give it a go. The Sea Front Office boat was patrolling with a crew and helm that I knew. In reality it’s no different to swimming with others. You can’t chat when you have less than a second to take a breath. But something about knowing there is a Seabird nearby gives you confidence to venture further away from the shore.
So after a quick cheerio, I set off! After a short moon dip on Tuesday night and sharing the water with 30 kids yesterday and Wednesday I actually welcomed the solitude and only got spooked once by a fish. I was quickly in a one, two, three, breathe hypnotic peaceful rhythm.

As is usual, I chose the wrong direction to swim. Even after my Tidal Walk lesson. In my defence, the Lifeguard on post went for a swim during her break and swan the same way….so I just assumed she had opted for hard start and easy finish.  Obviously not. It was a really hard leg home against a current pushing me out and west when I wanted to swim in and east. Took what felt like forever. Sandy bottom view was beginning to get monotonous.

There was a lovely welcome home crowd. A couple of Seabirds frolicking in the shallows but also lots of teeny tiny jellyfish attracted to the movement of my hands. Took a while to see them as so translucent and super speedy. Think they may have been stinging me which felt like tickles. Wikipedia tells me they are baby moon jellyfish. I was transfixed for ages watching them.

So 4 hours later and I am still smiling. Smiling because it was a lovely swim in crystal clear turquoise warm water. Smiling because the jellyfish were so cool and I felt like I was in an episode of Blue Planet. #doitfordavid. But most of all smiling because this seabird swan solo. She broke the flock formation, came back and it reformed on the beach post swim with a cup of tea and a picnic. I can do it!