Using Skin Swimming to beat the dark clouds of depression 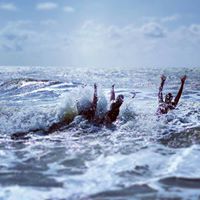 I have had depression and anxiety for as long as I can remember.
I have also loved being in, on or around the sea for as long as I can remember. It’s only been over the last few years that I have used the big blue as a therapy for my dark days.
Last year, when life threw me a gut punching curve ball, I recognised the familiar dark clouds forming on the horizon and took to the sea with what would become the Seabirds.
Two friends who had also been bashed around by life came with me. We bobbed, we splashed, we squealed, we cried, we laughed, we drank buckets full of tea and the clouds stayed on the horizon.

We formed a plan to skin swim all year round, build a community of like-minded seabirds, which we did, and the clouds stayed on the horizon.

As the temperature dropped our support and encouragement for each other did not. The sea didn’t disappoint, the endorphins flowed, the self-doubt retreated, the mental monkeys were silenced and the clouds stayed on the horizon.

I know the clouds are on the horizon. But as long as my frazzled brain gets some respite from my constant internal conversation from bobbing, surfing, swimming, paddling in the sea, they stay there as part of the view. Part of my world, but not the centre of it, as it has been at times.

There is lots of science about how and why salt water wellbeing works. In 2009, Prof Michael Depledge and Dr William Bird, from the European Centre for Environment and Health, based out of the University of Exeter Medical School, proposed a notion called the “Blue Gym” – the idea being that the sea can be used as motivation to exercise outdoors to influence health and wellbeing.

They found that regular contact with natural environments provided three major health benefits: reduced stress, increased physical activity and created stronger communities. They also found that people who lived 1km from the coast had much better self-reported health than those who lived inland.

Over the years, I have tried a more main stream approach to managing my mental health. I have tried various prescription drugs, had counselling, attended CBT courses, stop taking hormone contraceptives and the like. All of them have had an impact, to varying degrees and I am certainly not saying anyone taking prescription medication or therapy should stop. I am a seabird, not a doctor. But I would recommend Vitamin Sea as a complimentary approach.

Taking time to be in the salt water does work. The constant horizon is respite from screen scrolling. The sound of shingle moving under the waves is a welcome relief to traffic noises. The cold water gets your heart pumping and your endorphins flowing making you happy to be alive. It is a free and safe way to manage your clouds.

So what’s stopping you? Get in the sea!

………….The next Seabird challenge is a Mile in the Morning. It is exactly what is says. Now we have mastered the art of getting in all year round it’s time to swim further and for longer. Keep checking back to see how we are getting on!